President Donald Trump believes that the tax exemption for the Church of Scientology should be revoked. This is according to Lynne Patton, a longtime aide to the Trump family. Patton told actress Leah Remini through an unsolicited Twitter message that she would consult with the IRS directly for the revocation process. Copies of these messages were sent to the Huffington Post by the 47-year-old actress for verification. However, it’s not clear whether Patton communicated with IRS as earlier stated in her messages.

Experts have argued that such an action could be interpreted as gross interference by the administration on the IRS, an institution that is supposed to be independent. Larry Noble, the former general counsel of the Federal Election Commission, also argued that an attempt to try and sway the IRS to target a particular person or organization could result in a violation of the law. Noble added that the IRS must make such decisions based on its own internal processes. The institution must be independent of any influence from the White House or any member of the administration. 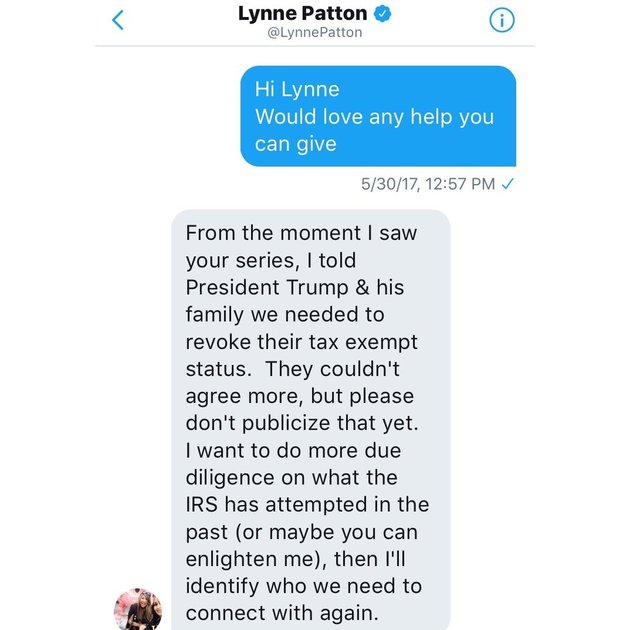 Leah Remini was a long time member of the Church of Scientology before leaving in 2013. Ever since, the 47-year-old actress has been working to expose abuses she says have been perpetrated by the Church’s leadership. Remini was featured in a documentary dubbed “Leah Remini: Scientology and the Aftermath.” The documentary first aired on A&E back in 2016. In it, Remini stars alongside Mike Rinder, a former top official of the church.

The documentary tries to use evidence and interviews to expose and document some of the abuses that the church leadership has committed over the years. Its first season became a huge hit, eventually winning an Emmy Award this year.

The conversation between the actress and Lynne Patton started in May. Patton is reported to have tweeted Remini asking her to contact her through direct message. The actress obliged. This triggered a series of exchanges between the two.

Patton noted in one of her messages that the moment she saw Leah’s documentary she spoke to the president and his family regarding the revocation of tax exemption for the Church of Scientology. Patton added that the president agreed. In the following message, Trump’s family aide promised to get the revocation done in four years.

The Church of Scientology received its tax-exempt status in 1957. This status was revoked ten years later. The IRS said at the time that the church’s activities were commercial and designed to benefit L. Ron Hubbard, the church’s founder. A prolonged campaign that took nearly 26 years to regain the church’s tax-exempt status began. The church eventually got its tax exemption again in the early 1990s.

Although the president might influence the tax-exempt status revocation, he cannot make any decision on this matter. The process of revocation is also very thorough. An inquiry on the church’s activities must be conducted. This could take some time but it’s not impossible to do it within 4 years as Patton promised.

Student loan repayments are set to resume from February 1st, 2022, and more details will be released over the coming weeks.

As of now, all these metaverses are built and powered by Ethereum which is one of the major large-cap cryptos in the world.

Musk said explicitly that if indeed the company cannot achieve a "Starship flight rate of once every two weeks”, then there is a real risk of bankruptcy in the near term.

Trump has hinted that he could run again in 2024 and has so far raised a lot of money to fund his campaign.

The move has been criticized and come under significant resistance internally from Google employees.

One of the biggest investor apps on the market suffered an extortion attempt after an unauthorized party gained access to the personal data of over 5 million of their users.